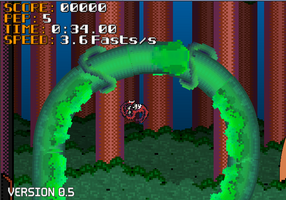 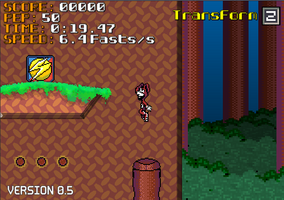 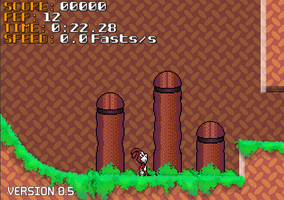 Well, I was working on 0.4 before Christmas, and took a break over the holidays, and when I went back to it I'd forgotten what the last release number was so I just incremented it again. I'm an eejit okay.

Big addition will be a new two-act stage: Meaty Junglira, which will come before the current stage Tomato Plant.

Meaty Junglira is the ancient home of the Pepperoni People and hosts all manner of sausage-based life forms, including bouncy sausage stalks that can grow to the size of trees.

You can listen to the music for the stage here

Other changes will be some bug fixes and as well as a quality-of-life change to how The Noid stops on slopes. The direction you hold on the D-pad will take precedence over his speed when his speed is low enough. Which means you should be able to super spin dab up hills easier.

In other news the Zone list has been mostly finalised and should be:

Join The Noid and Pepe the Pepperoni in the long-awaited sequel of Super Sonic proportions.